The future of network management and network configuration is here!

The simulated servers appear to network management systems as real network devices simultaneously supporting the NETCONF protocol v1.1 (RFC 6241), NETCONF v1.0 (RFC 4741), and (optionally) RESTCONF protocol (RFC 8040). In addition, the software also supports NETCONF Call Home over SSH and TLS (RFC 8071). You can benefit from NETCONF Simulator, for example, if you are involved in designing or testing of NETCONF/RESTCONF client or network management/orchestration applications, or conducting NETCONF client demonstrations or evaluations, etc. 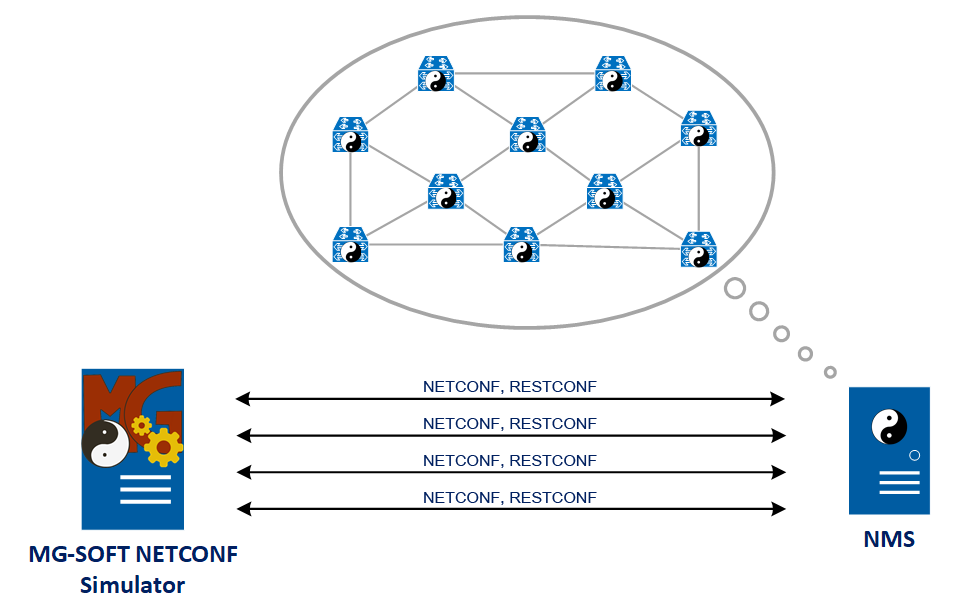 MG-SOFT NETCONF Simulator can take a snapshot of any NETCONF server on the network and simulate such server. In addition to the configuration and/or state data retrieved from a real NETCONF device, the software can download also the YANG modules from it and discover the features it supports. All this information is stored in a YANG profile that can be easily assigned to one or more simulated NETCONF servers.

Furthermore, the software incorporates different methods of simulating the NETCONF/RESTCONF server behavior by automatically changing the values of configured data node instances during runtime. In other words, one can configure a specific live behavior using the template-based mechanism and easily apply it to multiple simulated servers that use the same YANG profile, while having the possibility to customize/override the behavior for individual servers or even individual instances of a data node (e.g., one interface instance behaves differently than others). In addition to the GUI-configurable live template behavior, the software incorporates the Scripting API and supports scripting that enables advanced modeling of sever behavior, sending notifications, advanced creation of error scenarios and configuration of inter-relationships between YANG node instances. To make the simulations even more realistic, the software lets you create different scripting scenarios and activate or de-activate scenarios during runtime, without stopping the simulation.

NETCONF Simulator lets you configure YANG profiles also manually by adding desired YANG modules to the profile and editing the server snapshot in a visual manner. The software can use a data model defined by any set of valid YANG modules (standard and proprietary). It also lets you simulate invoking of RPC operations and actions defined in proprietary YANG modules.

Furthermore, the management console lets you configure access profiles containing NETCONF/RESTCONF access parameters, including user credentials, X.509 certificates and Call Home options. Access profiles can be assigned to one or more simulated servers in order to control their accessibility on the network.

NETCONF Simulator "implements" the 'ietf-yang-library' and 'ietf-netconf-monitoring' YANG modules, meaning that all YANG modules you assign to a simulated server will be automatically announced as supported in these two modules and available for download by NETCONF and RESTCONF clients. In addition, NETCONF Simulator "implements" also the network configuration access control model (ietf-netconf-acm) and supports all options of the NACM. Besides, the software supports also managing users via NETCONF/RESTCONF protocol by implementing the relevant portions of the 'ietf-system' and 'o-ran-usermgmt' YANG modules.

In addition to the original NETCONF event reporting mechanism defined in RFC 5277, NETCONF Simulator supports also a modern notification subscription model defined in RFC 8639 - RFC 8641 and referred to as "YANG Push". This functionality enables establishing dynamic and configured subscriptions to either event streams or datastore updates of simulated servers. The subscribed information is then pushed to clients by means of the NETCONF and/or RESTCONF notifications, as specified in RFC 8640 and RFC 8650, respectively. The software supports periodic and on-change push subscriptions that enable streaming of YANG-modeled configuration and state data from server to client and thus eliminates the need for periodic polling of YANG datastores by a NETCONF/RESTCONF client.

MG-SOFT NETCONF Simulator is a Java(TM) application that can be used on 64-bit MS Windows and Linux operating systems with 64-bit Java Runtime Environment version 8 or later installed. For detailed system requirements please consult the section 2.1 in the User Manual.